Meet the experienced and friendly doctors and staff who make Circleville Vision Care the leading provider of vision care products and services in Circleville. 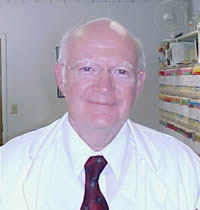 Dr. R. Eric Liggett was born and raised in Circleville, Ohio. He is a fifth generation Optometrist. He attended The Ohio State University for his undergraduate studies. He earned a BS in Visual Science and graduated with his Doctor of Optometry degree from the Illinois College of Optometry in May of 1993. He has been in private practice ever since. Dr. Liggett enjoys general and family practice Optometry.

Dr. Eric Liggett and his wife Michelle have two children. Besides spending time with his family, Dr. Liggett enjoys being in the great outdoors.

“Dr Liggett Took Amazing Care Of Me!! I Wouldn't Go Anywhere Else!!!”

You can schedule your next eye exam with us online!